Museums in Gdańsk - modern about history

Museums in Gdańsk - modern about history

Museums have a special place on the tourist map. It is in them that we remember history anew, we learn about facts that we have not heard about before. Thanks to them, we can move back in time to both very distant and very close periods. Museum exhibitions provide an opportunity to better understand the past. Participation in history is also a great tool for a better interpretation of the situation, empathizing with it, sometimes it allows you to understand the motives behind actions and events.

After reading the statistics on museum activity in recent years, I am happy to write: more and more people believe that history is worth experiencing! New museums and museum branches are being created in Poland, and the number of visitors is growing every year! The Pomorskie Voivodeship, together with Małopolskie Voivodeship, are usually in the lead in the country in terms of the number of museums, with a share of around 11-12% in the total. They are second only to the Mazowieckie Voivodeship with over 13% share. What is very important, Pomeranian museums are eagerly and frequently visited by domestic and foreign visitors.

Explore with the comfort of safety

Due to the fact that recently museums and art galleries have been operating again, following the sanitary regime, visiting is safe and recommended as a good way to activate. It allows you to spend time in a pleasant and healthy way, both for business and for tourism purposes.

And which museums in Gdańsk are my favorites and can I recommend them with a clear conscience? The choice, although subjective, is quite simple and coincides with that of a statistical tourist visiting the Tri-City. Moreover, it is identical with the choices made by my relatives - family and friends - visiting Gdańsk. Most of the visits involve several hours' walks between the exhibits.

I will present two proposals that are absolutely flagship choices, if we want to spend time in a developing way, we are curious about the world and history, and we appreciate exhibitions perfectly prepared in terms of content and visuals. 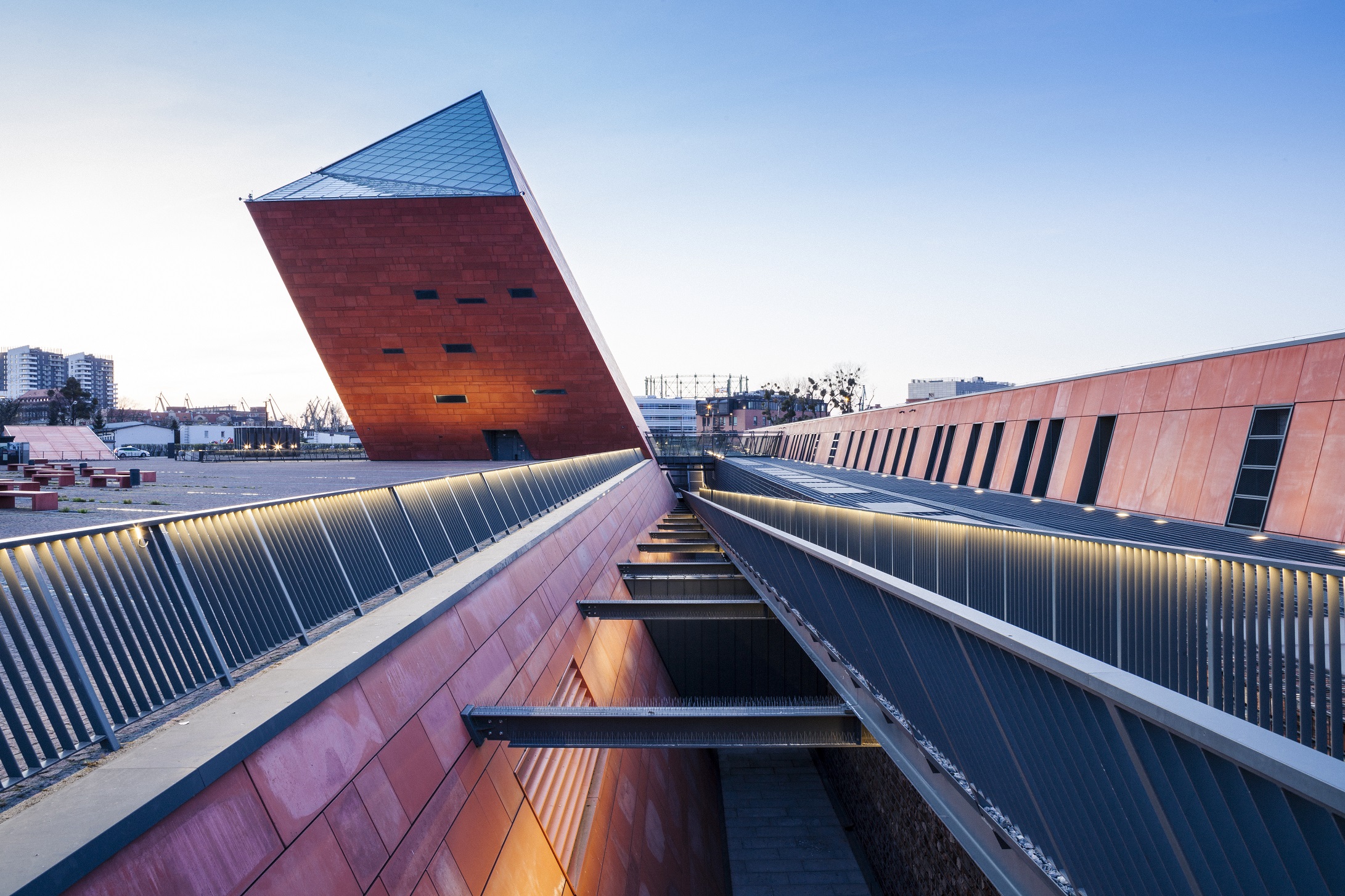 Photo: Building of the Museum of the Second World War in Gdańsk

Museum of the Second World War is my undisputed favorite! The 2019 annual report shows that the museum was visited by over half a million visitors in 12 months. TripAdvisor users also ranked them first in the Gdańsk museums' ranking, and almost 80% of those giving the rating gave them an "excellent" rating.

Since 2017, the Museum of the Second World War is located at Władysław Bartoszewski Square, on the Motława River, near the historic city center. The shape of the building is a symbolic expression of the relationship between the past, that is war, with the present and the future. It is highly appreciated by international architects and tourists. 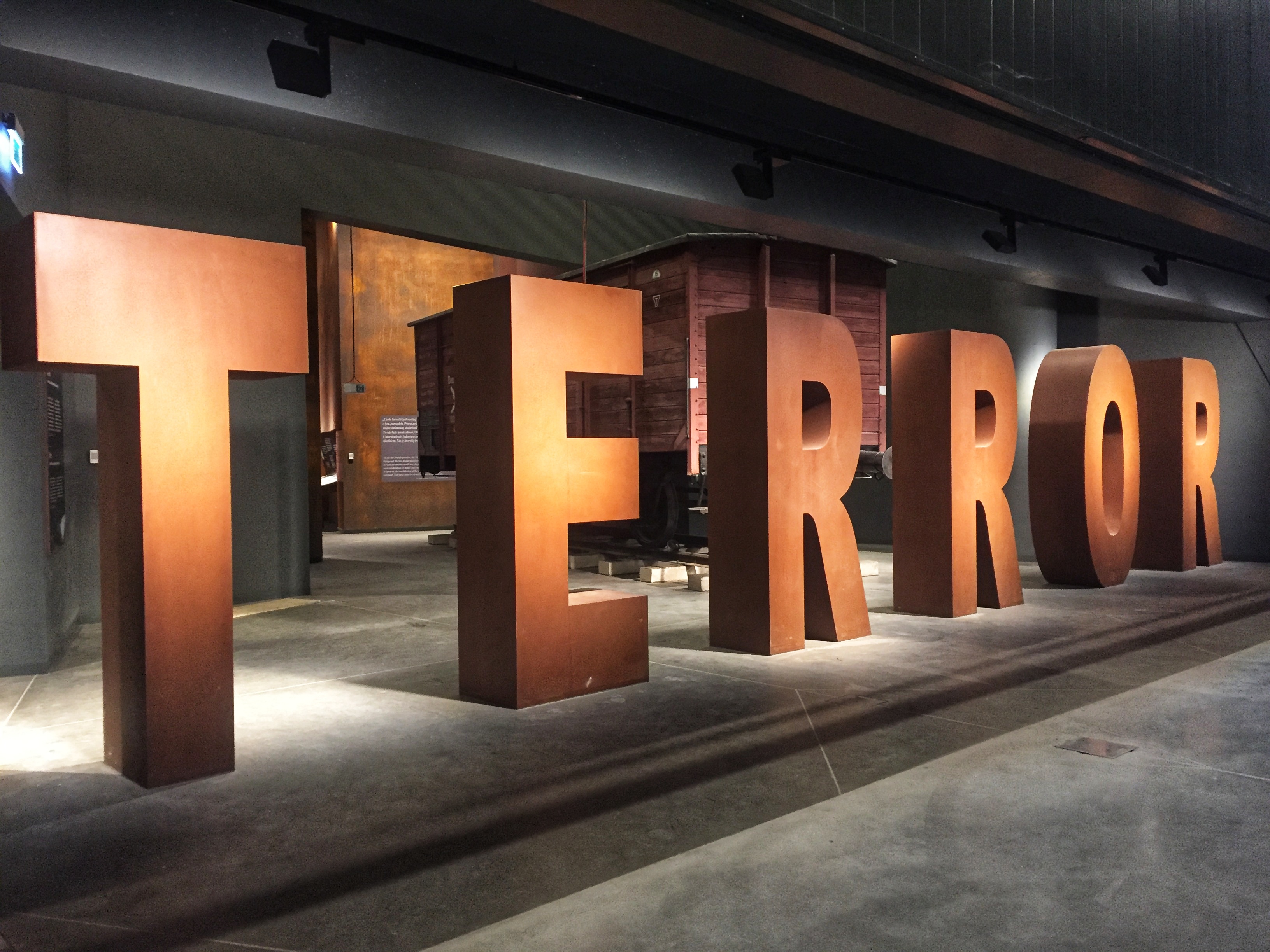 Photo: Inscription "Terror" at the Museum of the Second World War

The mission of the museum is to show the history of the conflict from the perspective of Poles' experience, taking into account both the great politics of the time, but also presenting the attitudes of people towards the reality of war and the nightmare of occupation. For this, he uses modern forms of communication. The heart of the museum is the main exhibition which tells about the genesis and consequences of the war, its victims and perpetrators, about heroes, but also about ordinary people. For this reason, it allows us to better understand and empathize with the difficult fate of the participants of the events. The exhibition presents the Polish experience of war in a broader European and world context, which makes the World War II the only museum in Europe that comprehensively presents the course and nature of this military confrontation. It helps to shape the historical awareness of both Poles and numerous guests from abroad. In addition to the main exhibition, we can visit temporary exhibitions, use the New Technologies Zone or watch a film in the Museum Cinema.

The museum collections contain lots of photos, maps, documents and items. We can see the Enigma encryption machine in the version used by the German Kriegsmarine, the Soviet T-34 tank, but also everyday items such as playing cards, a rocking horse or an electric washing machine. All this in a perfect, modern setting. 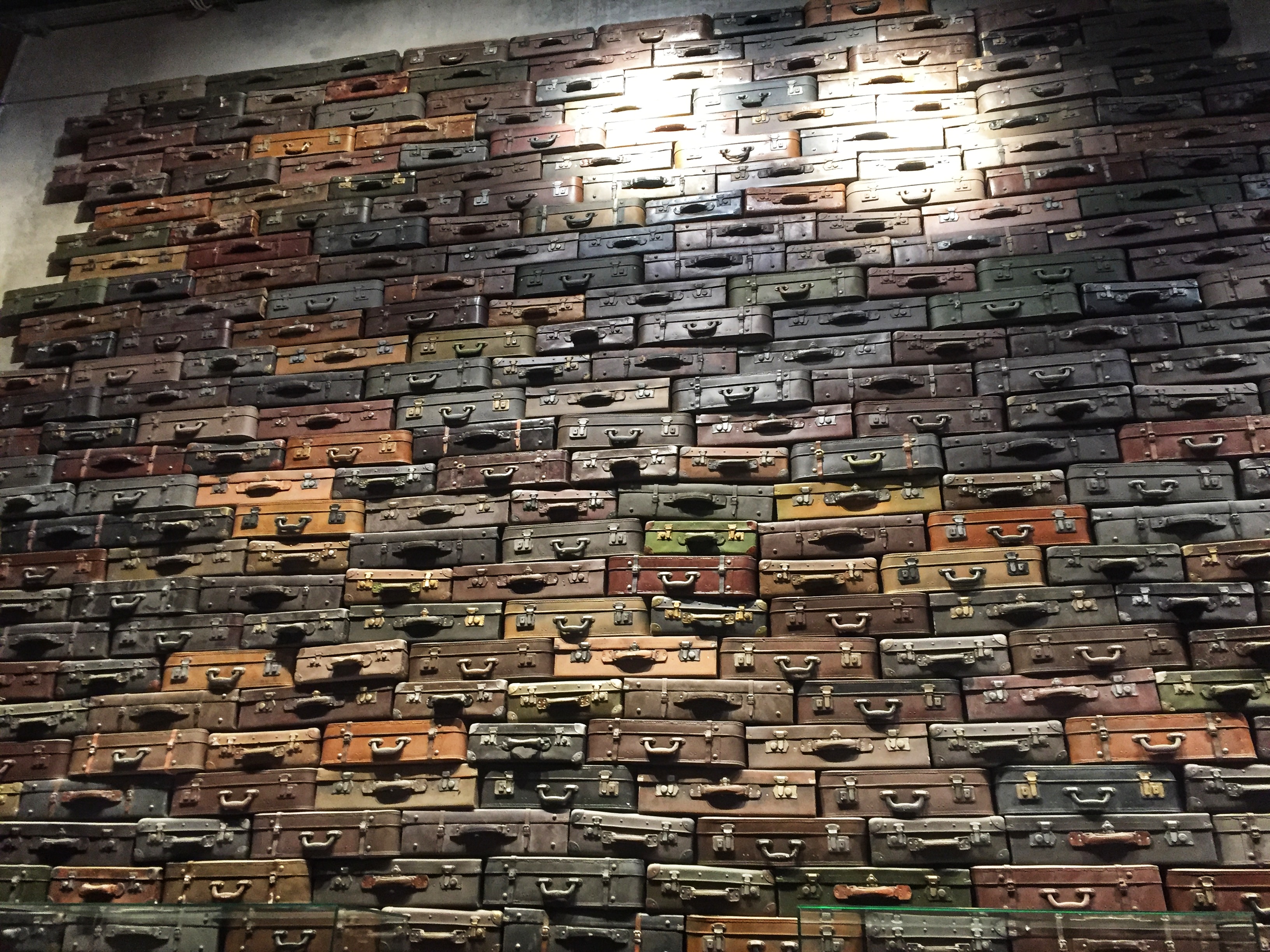 Photo: Suitcases of deportees at the Museum of the Second World War

What impressed me most is the sight of the pre-war street, reconstructed with historical fidelity. There is a bookshop in my memory. There was a large number of books in the display window, incl. "120 Adventures of Koziołek Matołek" and "About a cat, what dusted the pipe and about other wonders", which were published at the beginning of the 1930s. In the shop, in addition to books, you could get pencils, notebooks, inkpots, and also pens and nibs needed to assemble the pen. An exhibit that has also stayed in my memory for good is a wedding dress made of silk, which used to be the parachute canopy. It seems to me to be an excellent allegory of life: what is at the front and what is beyond the front, as well as what happens during and after the war.

Important information for visitors: The museum is closed on Mondays (information on 22/02/2021).

European Solidarity Center - learn about history, decide about the future

ECS has always been on the podium in my private ranking. As we can read in the 2019 Annual Report, nearly 4.5 million people visited the museum from its inception until the end of 2019! TripAdvisor users ranked it second in the Gdańsk museums ranking, casting over 3,500 votes, and three out of four people giving the rating gave it an "excellent" note. The museum was also noticed and honored as the first in Poland with the Council of Europe Museum Award. 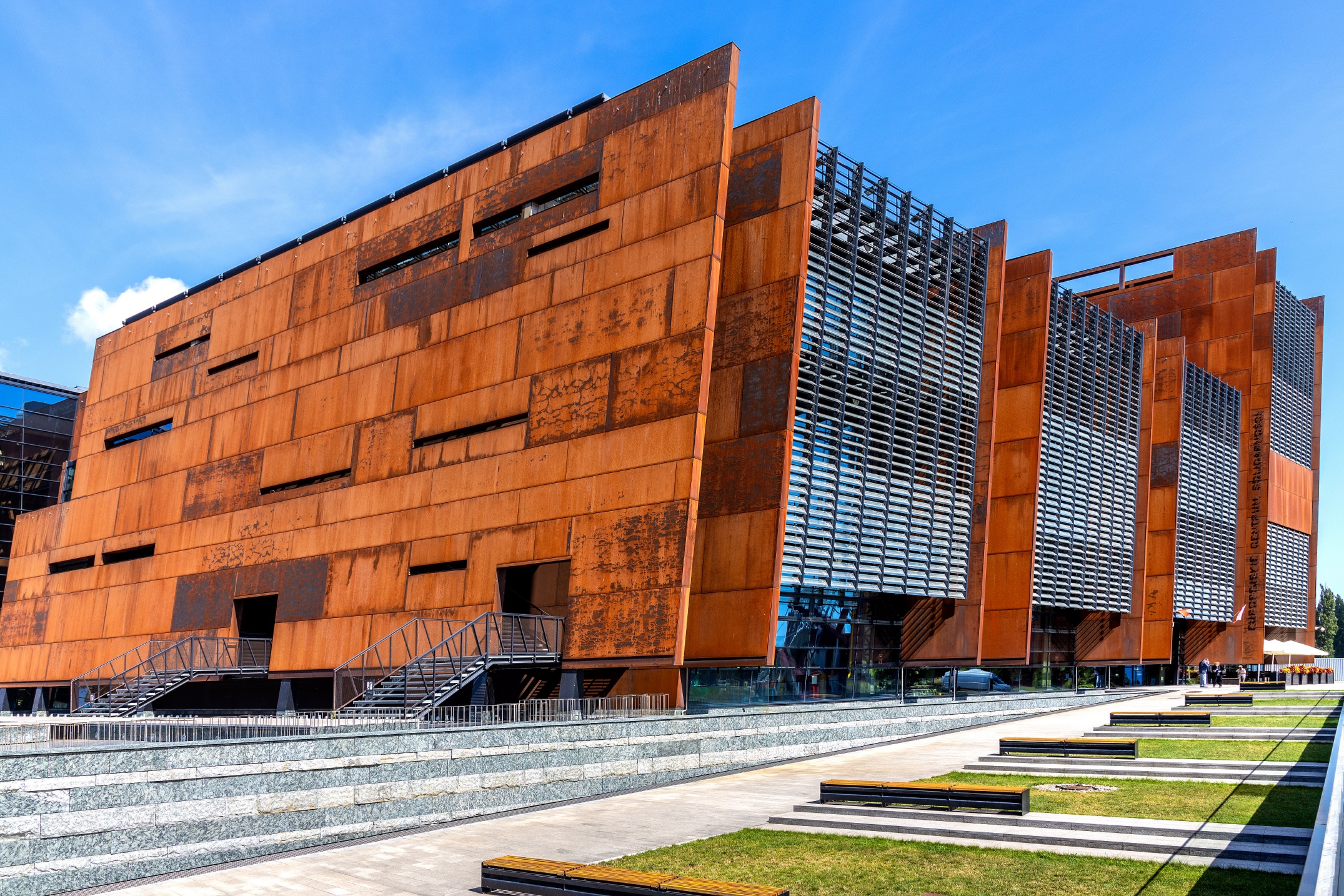 The ECS building itself is already inspiring. An unobvious, rusty block, located at Plac Solidarności, emerges from behind the Monument to the Fallen Shipyard Workers. The mission of the European Solidarity Center is to ensure that the ideals of the Solidarity movement, ie an open and solidary society, democracy, and a culture of dialogue, remain relevant and attractive to future generations. Moreover, the creators of the museum want to make Solidarity appear in the memory of Poles and Europeans as a peaceful revolution, also giving hope to those who do not live in democratic and open societies.

In the spacious interiors of the museum, there are permanent exhibition rooms full of unique exhibits. History is intertwined with modernity thanks to the multimedia setting. We can take a close look at moving souvenirs, photos, documents, maps and manuscripts. Numerous video and audio materials are also available. In Room A, you will find a battery cart, which during the strike served not only as a means of transport, but also as a lectern and confessional. There is also a gantry crane, which is the place of performance of Anna Walentynowicz's official duties, whose dismissal was one of the reasons for the strike. In total, we can see nearly 1,800 items. 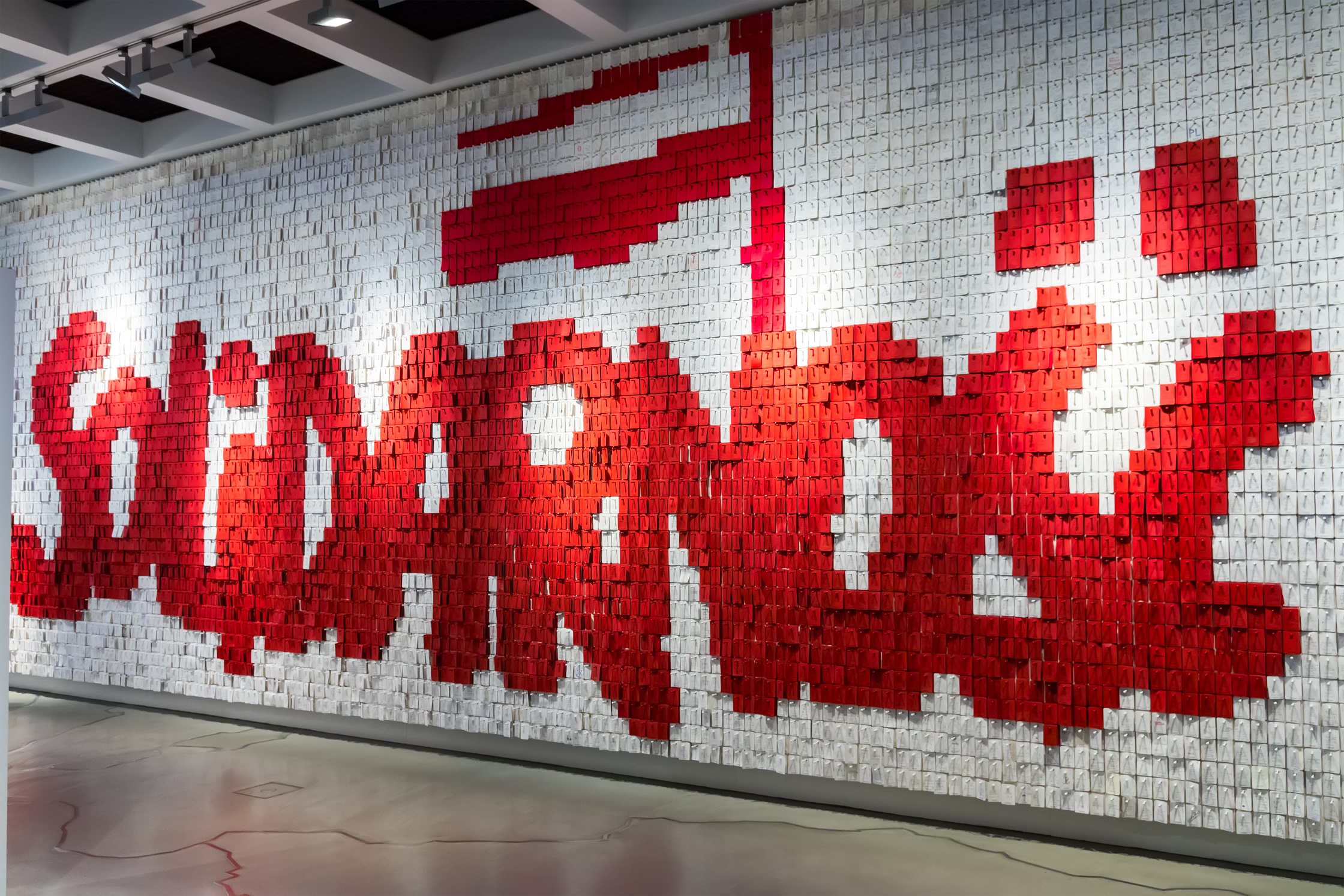 Photo: The inscription "Solidarity" in the European Solidarity Center

A visit to the European Solidarity Center is an excellent and valuable lesson in modern history. The image of Ludwik Piernicki's shot jacket stuck in my memory - just a 20-year-old plumber from the Gdynia shipyard, who became a victim of the events. The greatest emotions, however, were aroused by the large inscription "Solidarity" in the F Hall, the letters of which consist of postcards with messages left by the visitors. The content of many of them causes emotion, enormous gratitude for the opportunity to enjoy freedom, but also the fear of losing it. 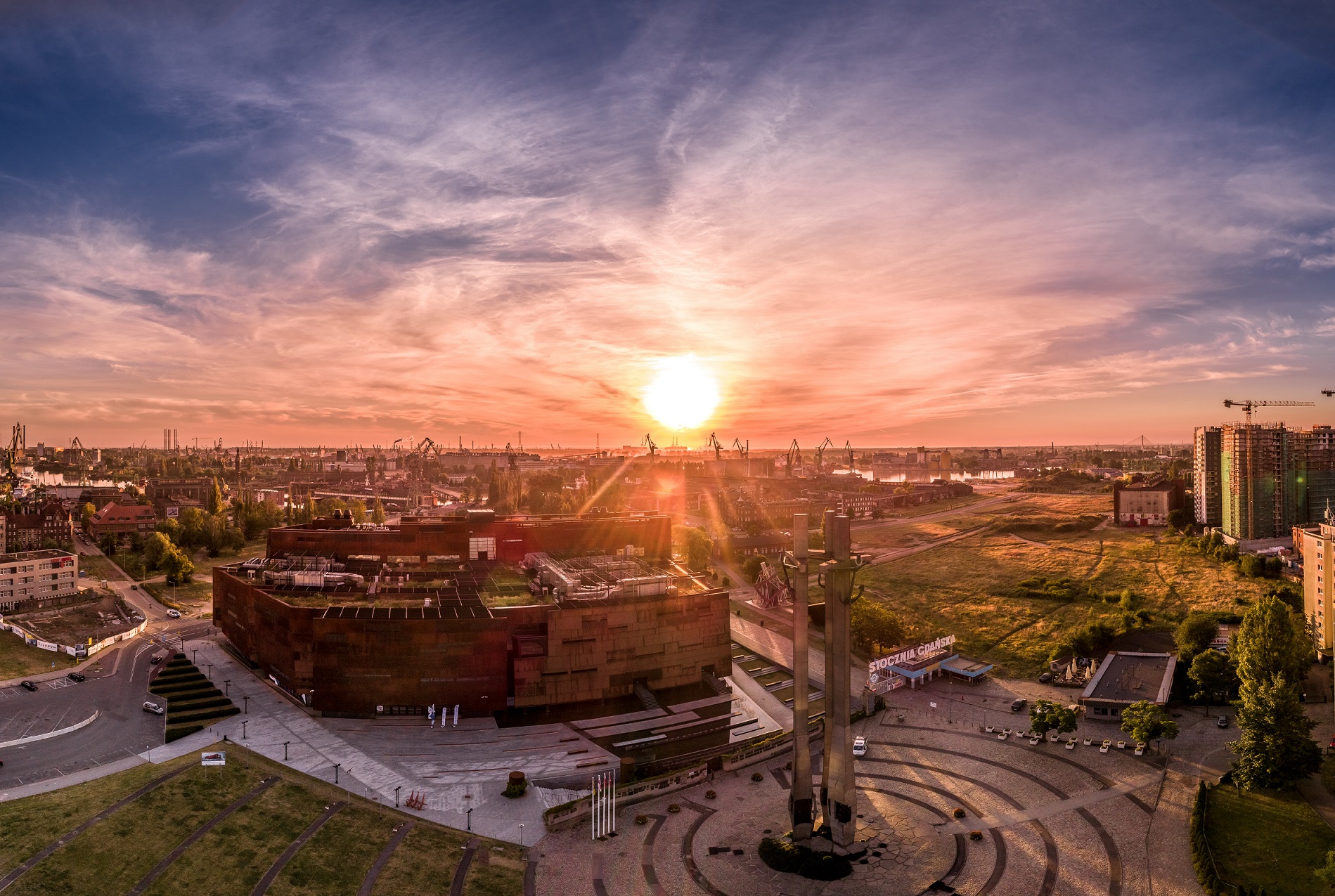 Photo: A bird's eye view of the Solidarity Square in Gdańsk

I heartily recommend visiting the museums mentioned in the text, but also other Tri-City objects, more about which I will write more soon, because for many of us a live history lesson, through experience, is more valuable than the best theoretical lecture.

If you decide to visit ECS and MIIWŚ, plan your time well, as each visit takes at least 3 hours of sightseeing, although for many people, even 6 hours (or more) is not enough.

Before the visit, it is worth getting acquainted with the current opening hours, the availability of exhibitions, the possibility of using audio guides and other information.

Check out the other posts: