Gdańsk from the water perspective

Gdańsk from the perspective of… water!

The holiday season at the Polish seaside is in full swing! We also started the summer with a bang in the Tri-City, because the temperatures only occasionally drop below 20 degrees Celsius, which makes everyone thirsty for hot sand, sunbathing and swimming in the waves happy. However, Gdańsk not only lives by the sea and has many other interesting tricks up its sleeve. For those who are looking for a respite by the water, but not necessarily on the vast beaches or jumping among the Baltic snowmen, I have very good news. Just like for lovers of learning about history anew, and above all, a look at the famous face of the city from... an unknown perspective - the perspective of water.

I invite you to the report from the cruise! 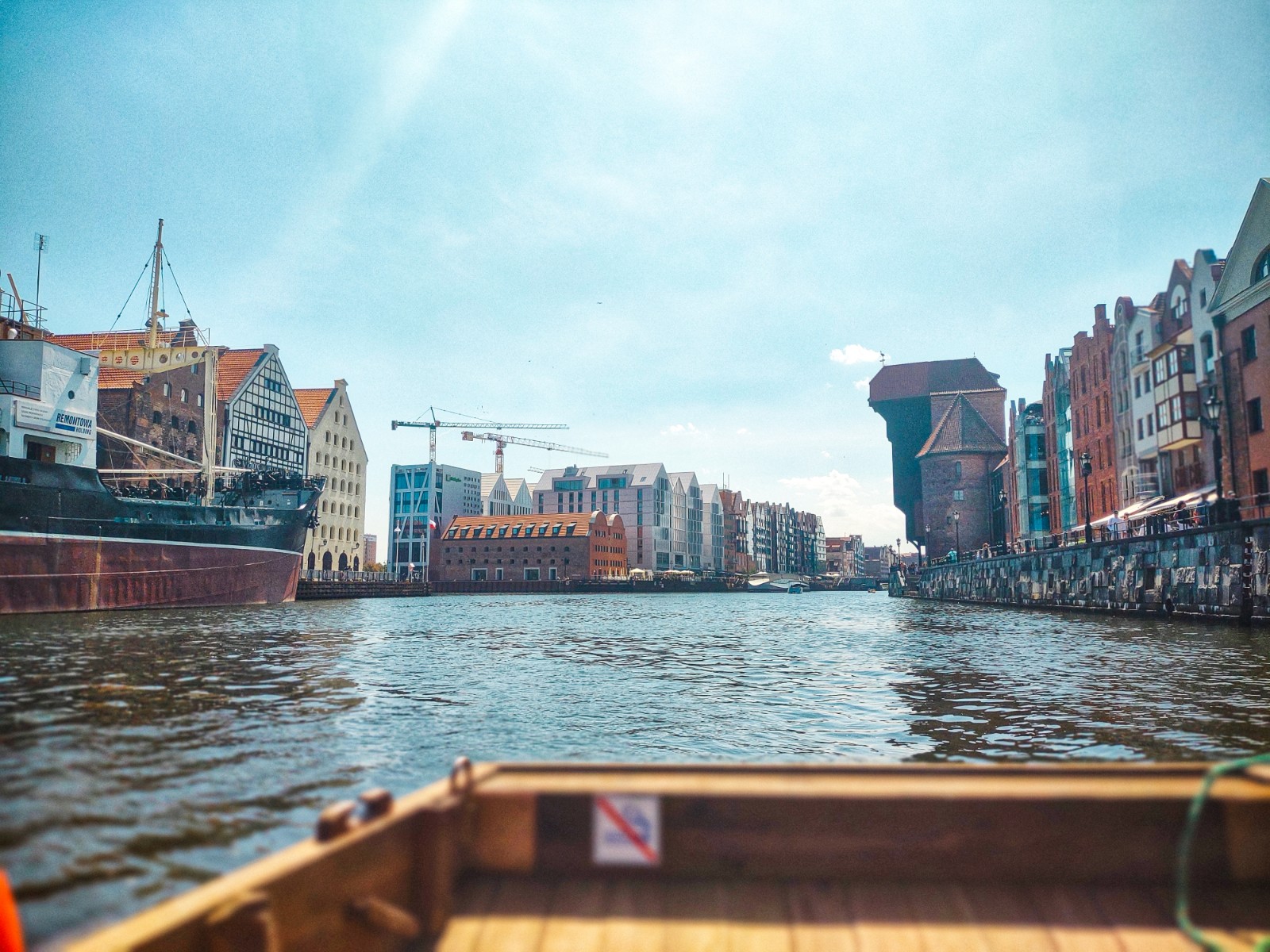 Photo: A cruise around the center of Gdańsk

Galar - what is it actually?

When I first heard about the galar cruise, to be honest, I didn't quite know what to expect. In the past, I had the opportunity to navigate large passenger ships, smaller cruise ships, sailing ships stylized as pirate galleons, catamarans and finally all kinds of sailboats, kayaks and pedal boats. Galar sounded a bit strange, but also evoked a certain hint of fascination. As it turned out - very rightly so, because it allowed you to feel the adventure at your fingertips. Now that I have learned the essence of these flat-bottomed boats myself, I will gladly introduce them to you.

The boats on which I had the opportunity to sail (as well as thousands of other people before me) are a replica of wooden lighter-type boats popular in the 18th century, which entered the waters of the Motława for commercial purposes. These Polish river ships were used to transport goods downstream such as salt, grain, lime, and soap. People flowed to Gdańsk mainly from the upper Vistula and the San. The then gallows were impressive, 18 m long and 8 m wide. They could carry up to 25 tons.

Contemporary Gdańsk Galars are smaller - they are about 9 m long and 3 m wide. They were designed and made by the most outstanding Vistula boatbuilder - Mr. Wacław Witkowski. They can take on board up to 12 hungry new experiences of tourists and residents, of course, because there are also many residents of Gdańsk willing to look at their city from a different perspective. 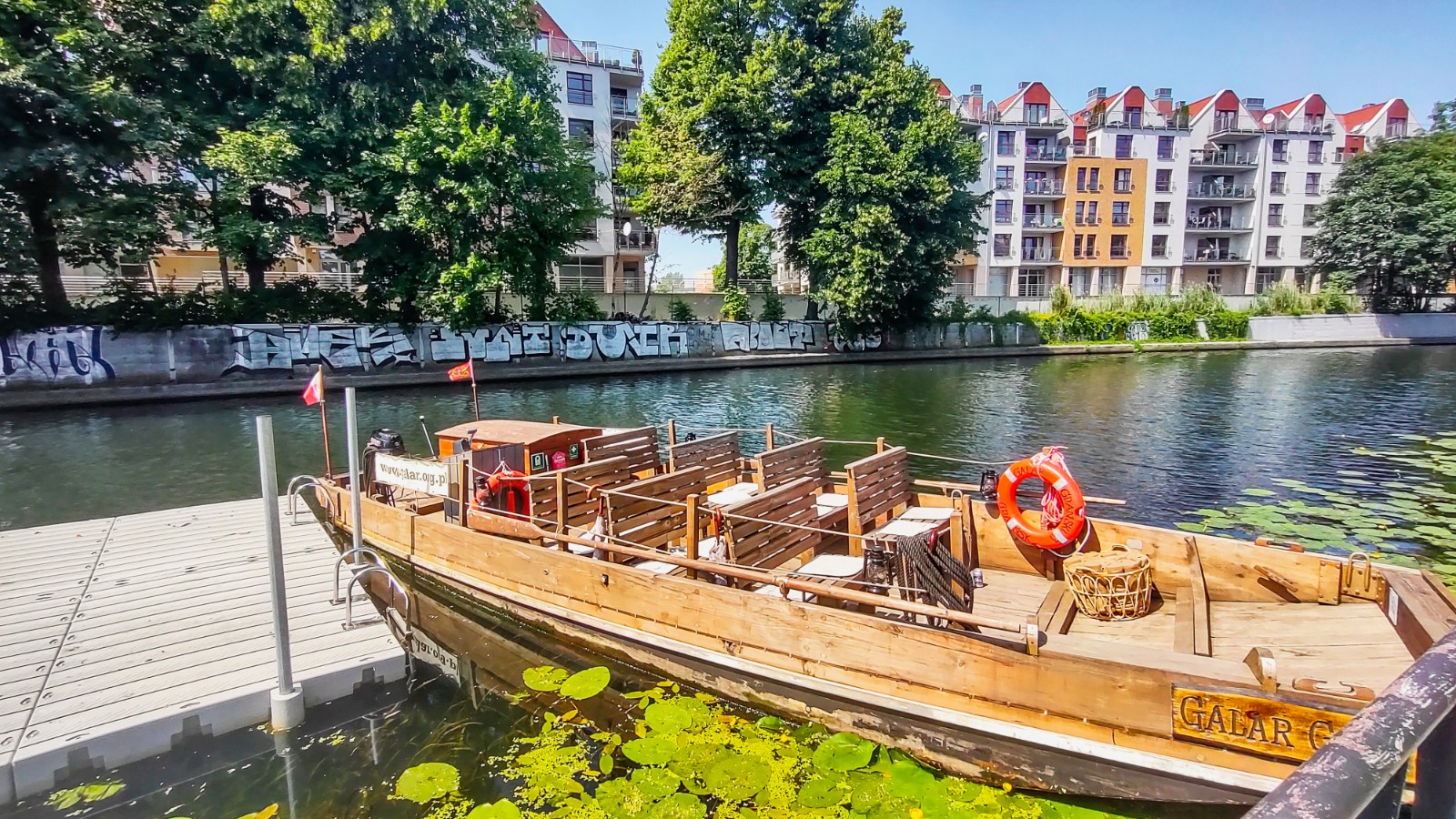 A few words from the captain before leaving

The Galar Gdański Foundation, which in 2018 decided to revive river traffic with flat-bottomed boats, approached the whole project with passion and commitment. The possibility of checking the course schedule for the coming days and weeks on the website and in social media is a great plus. But, perhaps more importantly, tickets can also be booked without leaving home, which guarantees that the tickets for the selected cruise are sufficient and that we will not be sent back "with the receipt". In addition, I received an assurance from Mr. Piotr, the project manager, that the cruises are guaranteed from the first willing - this fact, from my perspective, deserves special recognition and a great plus, because it stabilizes our plans. We are sure that the choice of the date of the trip depends on us, and not on the appropriate size of the group, which is usually beyond our control as single tourists.

What is very important, the cruises are available to everyone: people with disabilities, families with small children, the elderly, as well as for dog owners who can take their pet in a muzzle on board for free.

Both trips in which I had the pleasure to participate began at the Imperial Shipyard at Dokowa Street. While still in the port, the guide presented the general safety rules and suggested wearing life jackets. Due to the fact that the boats are open - which allows you to feel the prevailing atmosphere even better, but also does not isolate from the weather conditions - it is worth paying attention to the selection of the right wardrobe. It is good to be prepared for potential wind or rain, although on a summer day, the breeze that accompanies sightseeing is at a premium. Those who are cold on the sleeper will find blankets, and those thirsty can take advantage of the water proposed by the captain.

I also have good news for those of us who experience the inconvenience of seasickness - you practically do not feel rocking on the boats, so the journey should be spent only on pleasant experiences - listening to interesting stories and almost sliding our hands over the surface of the water.

Having this knowledge, we can go on a trip. Please come on board! 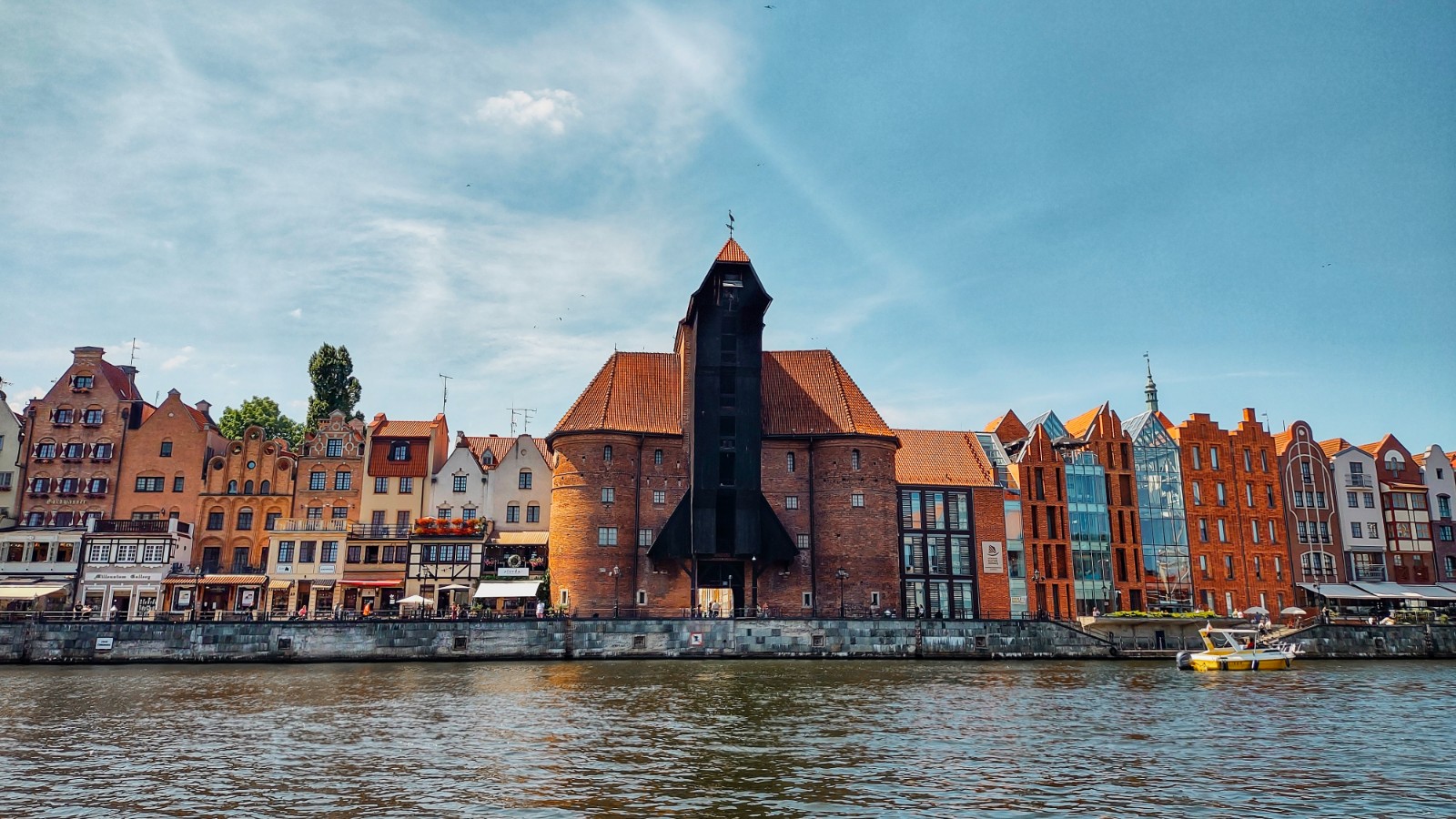 Photo: A cruise in Galar Gdański, view of the historic port crane - Żuraw

A galar cruise around Gdańsk

This is the name of the first trip I took. I chose it because I was curious if and how different Gdańsk turned out to be from the perspective of an intimate boat. I can say right away that the city has charmed me again!

Motława, in whose trough we initially moved, was a witness to all great historical events. For centuries, it has been the center of economic life, becoming a trunk around which numerous gates, streets and houses, connected by bridges, are located. Throughout its history, repeatedly dug and cleared in various directions, it symbolized all the traffic that took place in Gdańsk.

Within a few dozen minutes of the cruise, I had the opportunity to see medieval houses, water gates, and a moment later modern apartment buildings in the style of granaries. Connections between rivers and canals gave a fresh look at how the city once functioned and functions today. 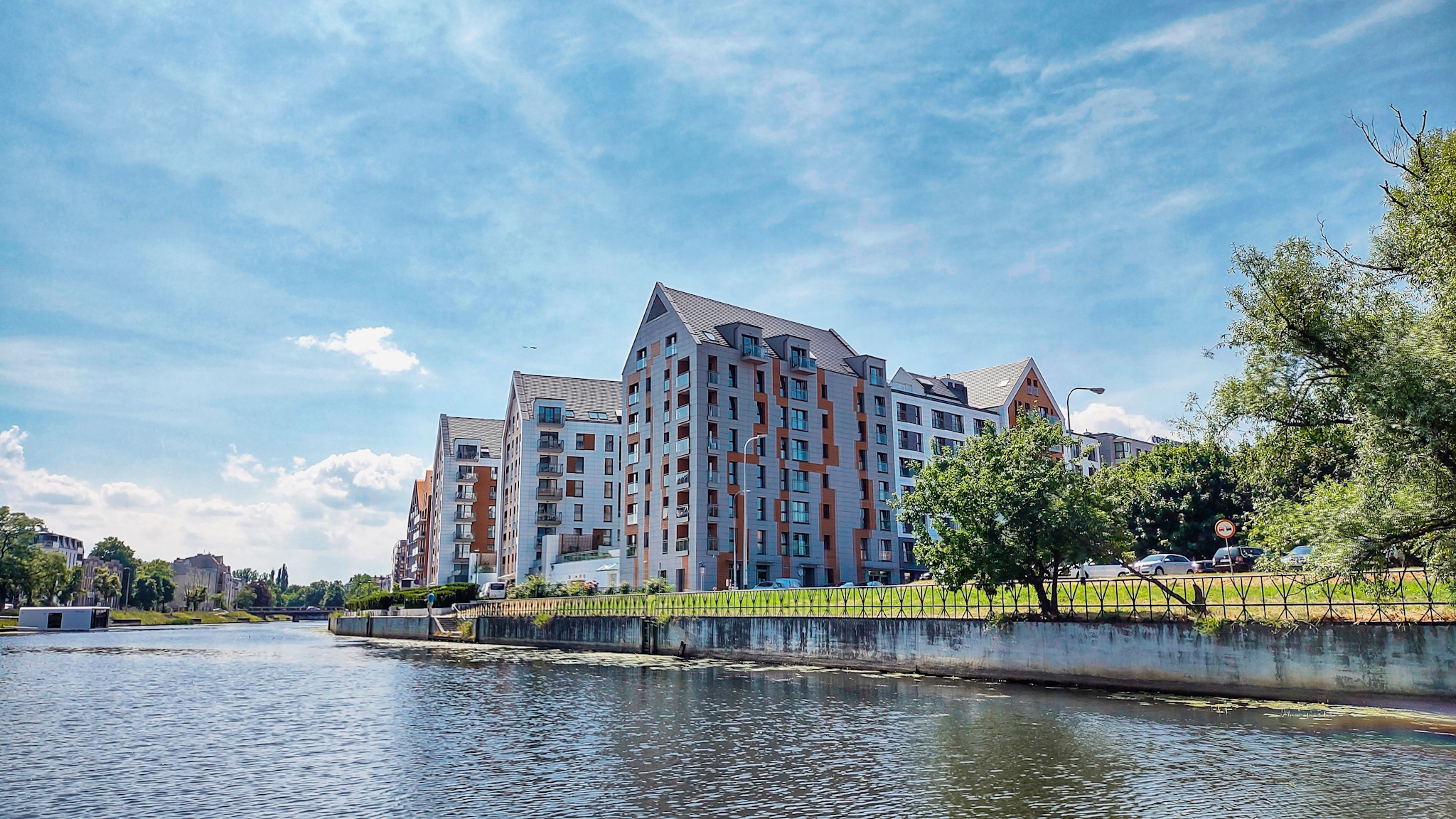 Photo: A cruise on the Granary Island in Gdańsk

Even though I knew the history of Gdańsk before, I heard many interesting facts that I did not know about. All this was presented in an accessible way, without overloading with information, and at the same time interesting enough to listen to the story with full concentration. The captain is an excellent narrator, understanding the needs of tourists, and a real enthusiast of Gdańsk and water.

During the cruise, you will learn more about the water gates, incl. Zielona Brama and Zielony Most, Brama Chlebnicka, Brama Mariacka, which is the gateway to the most beautiful street in Gdańsk. You will learn more about the relations between the inhabitants of Gdańsk and the Teutonic Knights, you will find out what the letters "EC" mean on the building of the Baltic Philharmonic, you will easily recognize the granaries that belonged to the king in the past. You will also have the opportunity to see Gdańsk as it remained after World War II. 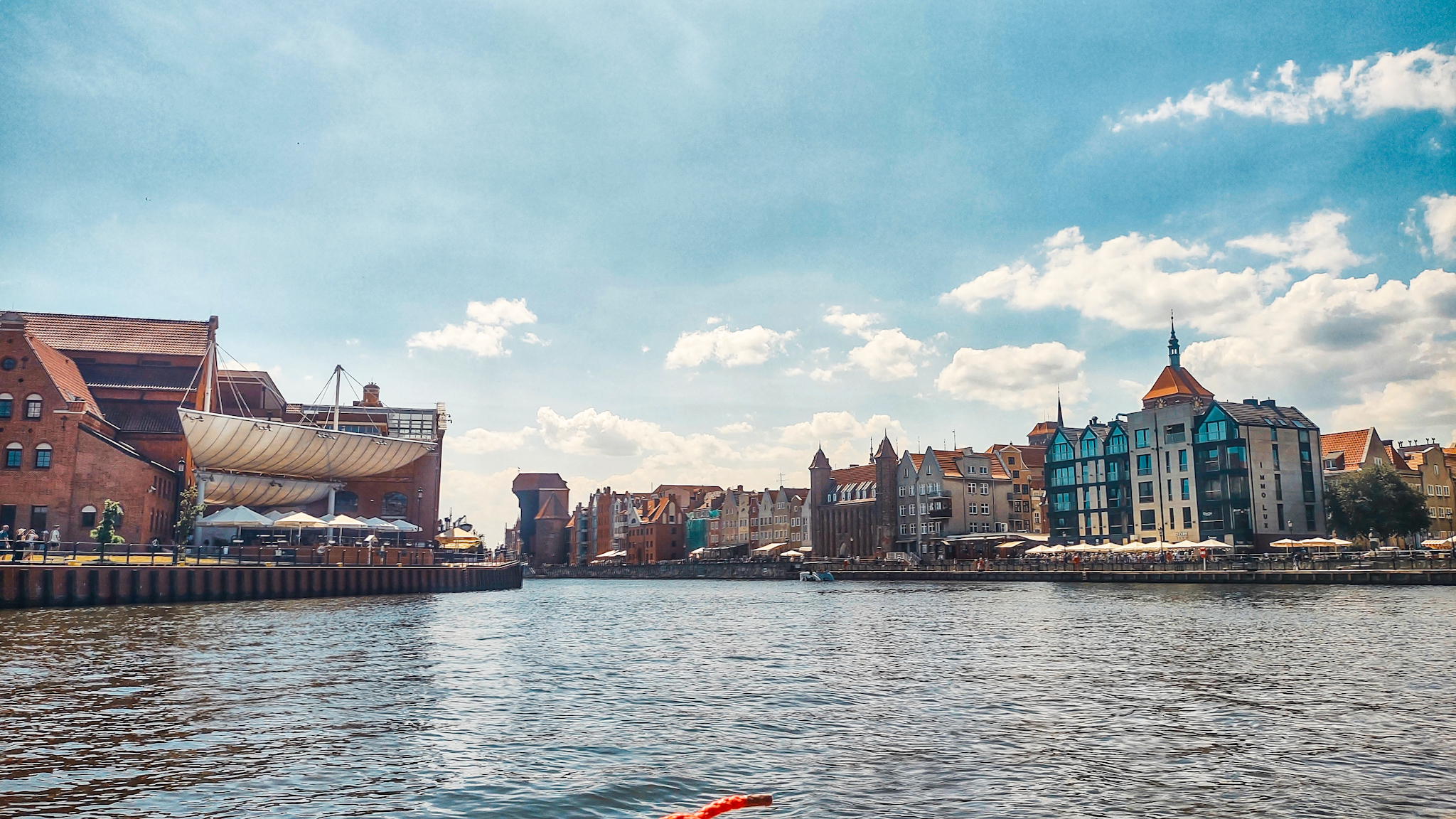 What particularly captivated me was the visualization and understanding of what the river was for Gdańsk, but also for raftsmen coming from the south, and how important it was for its fate. As a nature lover, it was with undisguised joy that I leaned under the low-hanging bridges to reach the historic Stone Locks, from where there is a view of quite wild, meandering areas ruled by water. It is a completely different, beautiful world, a few minutes' cruise away from the very center, shimmering in the spotlight. For me, it is a great value and for that I especially love Gdańsk.

I would also like to mention that apart from Polish tourists on board the galara, there were also a couple of tourists from abroad. The captain rose to the occasion, and even above, and presented absolutely every piece of information in two languages, so that the English-speaking guests would learn as much as the Polish-speaking ones.

After returning home, I quickly realized that one cruise was definitely not enough. And what I did with it, you will find out in the next post, which I invite you to!

Psssssst, I will tell you a secret - for the Guests of Grano Hotels, the offer of galar tours is wider! Do you want to find out? Ask our concierge during your stay, book a cruise, take a few dozen steps from the reception and get into the galley, waiting only for our hotel guests.